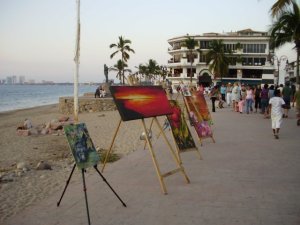 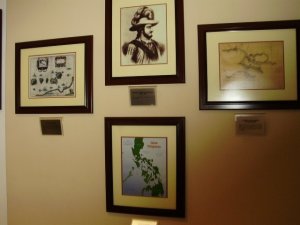 It is a holiday weekend here in Mexico, Constitution Day. We were at the Malecon last night with Brian and Diane and it was full of local tourists mostly from Guadalajara and inland cities. There were fireworks display and shows along the boardwalk. Dinner was great at “La Distilleria” and the live Mariachi Band (which Brian had to be a part of, in any capacity). My good friend, Miles Black sent me a song called “Malecon” which I sing with my trio in Adriatico. It is a beautiful song and perfectly depicts the atmosphere of the Malecon.

We visited the Naval Museum in Puerto Vallarta located beside the Los Arcos Amphitheatre. It was very informative and quite a pleasant surprise. There are different artifacts, maps, pictures and miniature replicas of the ships that the Spaniards used to explore the route from east to west. What was surprising to me was a big part of the display and history was about the Philippines. The galleon used the Fort in San Blas as one of their stops. When I was in Acapulco, Philippines was also a big part of the museum of the Fort of San Pedro. They had maps and pictures of the explorers landing in the Philippines. The Philippine islands played a big part in the history of Mexico under the Spanish regime. It was the Manila-Acapulco galleon trade that brought riches to Spain by bringing in spices, tea, silk, from all parts of Asia. The names of explorers are all familiar to me from my high school history such as Legazpi, Villalobos, Magellan etc. It brought a lot of memories to me.

It is Superbowl Sunday today, so the TV is blaring with John and Doug watching the game. January is just a blur for me now. What happened to the time? Why am I so busy? I seriously need a holiday. I think I still don’t know what to do with my unregimented schedule. It’s different when you have a set time to wake up and a place of work to go every morning. I miss my fitness classes at the gym. Instead, I do my pilates (in my room), walk on the beach and around town in the morning or swim in the ocean. Not a bad trade but there is really no timetable to do those things, which really throws off my usual hurried lifestyle. I don’t even have to deal with traffic or bad weather anymore. Speaking of weather, nobody talks about weather here. Everyday is sunny. Some days are just sunnier than others. Sometimes I wish it would rain even just for an hour, just buckets of rain. I wake up early everyday although I don’t go to bed until midnight. It must be the pull of the sunlight outside. I find mornings are good for reading and checking emails. That is, if I decide not to go for my walk. This lifestyle is so new to me that I still don’t know how to slow down. I feel guilty if didn’t do any work during the day. I had to cut down the maid’s cleaning days because John and I clean the house in between her visits.

The tourists are down significantly this year. There are conflicting reports. Some say it is down 40% some say it’s 20%. My observation based on the restaurant crowd is, it is down by about 20%. The budget value restaurants are doing okay and so are the high end ones. The middle of the road eateries and bars are the ones really suffering. As they say, the rich will always have money even in recessionary times. They just have to cut down on their jet fuel consumption.

We are playing four nights at Adriatico (Tuesday to Friday) and on Valentine’s Day. It is getting busier with tourists and regular snowbirds. We will be performing at Cuates y Cuetes on the Playa los Muertos beach (Old Town) on Feb 15 in the evening. Don’t ask me about the time. I guess we will play when everyone is ready.